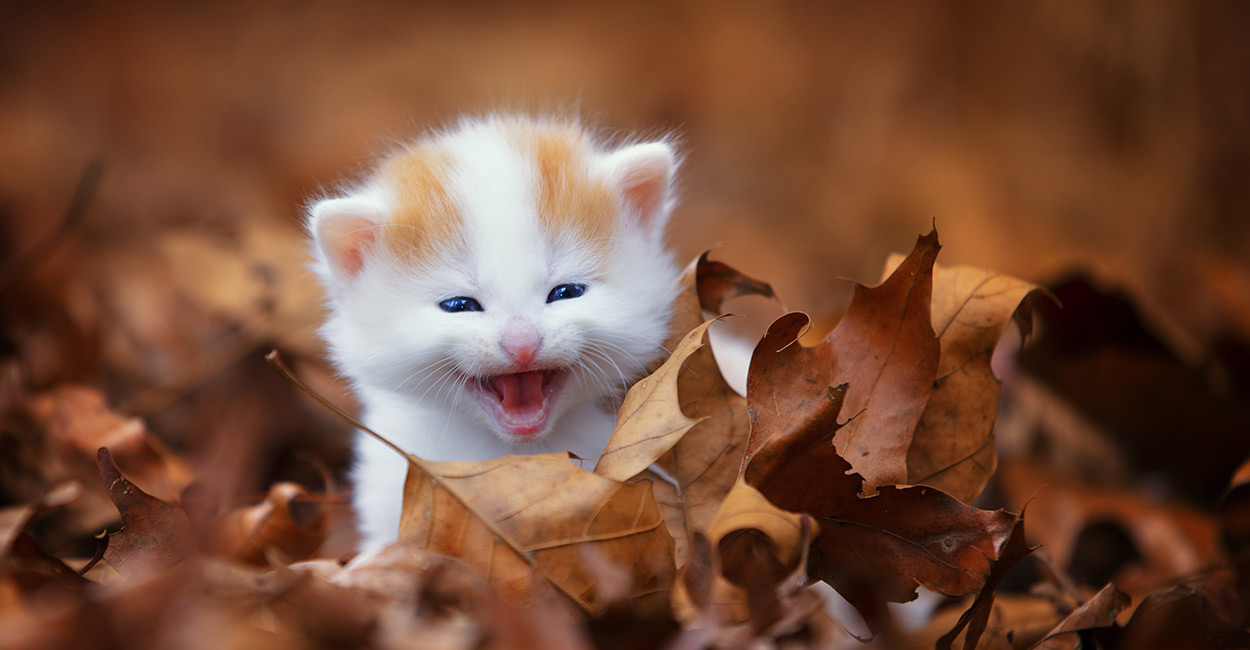 Following our recent article on newborn kittens, this time Clare Hemington charts everything you need to know about kitten development, from birth to five months old.

Asides from being utterly adorable, newborn kittens are remarkable.

Within 14 weeks they go from being blind, deaf, immobile and totally dependent on their mom, to being self-sustaining hunters ready to leave home and make their mark on the world.

In Newborn Kittens, Sarah Holloway looked at what to expect from newborn kittens and how to care for them.

In this article we’ll explore the nature, approximate timings and purpose of the all major developmental milestones in a kitten’s life up to the age of 10 weeks.

However, before we do that lets briefly look at how we can tell the age of a kitten, when it’s birth date is unknown.

if you’ve ever rescued a kitten, one of the first things you’ll probably have asked yourself is how old is my kitten?

To the untrained eye assessing this can be tricky, but a quick look online will provide lots of information, including kitten age charts and kitten weight charts which can help you make a good guess.

However, your veterinarian will be better placed to know how to tell the age of a kitten.

How to Tell How Old A Kitten Is 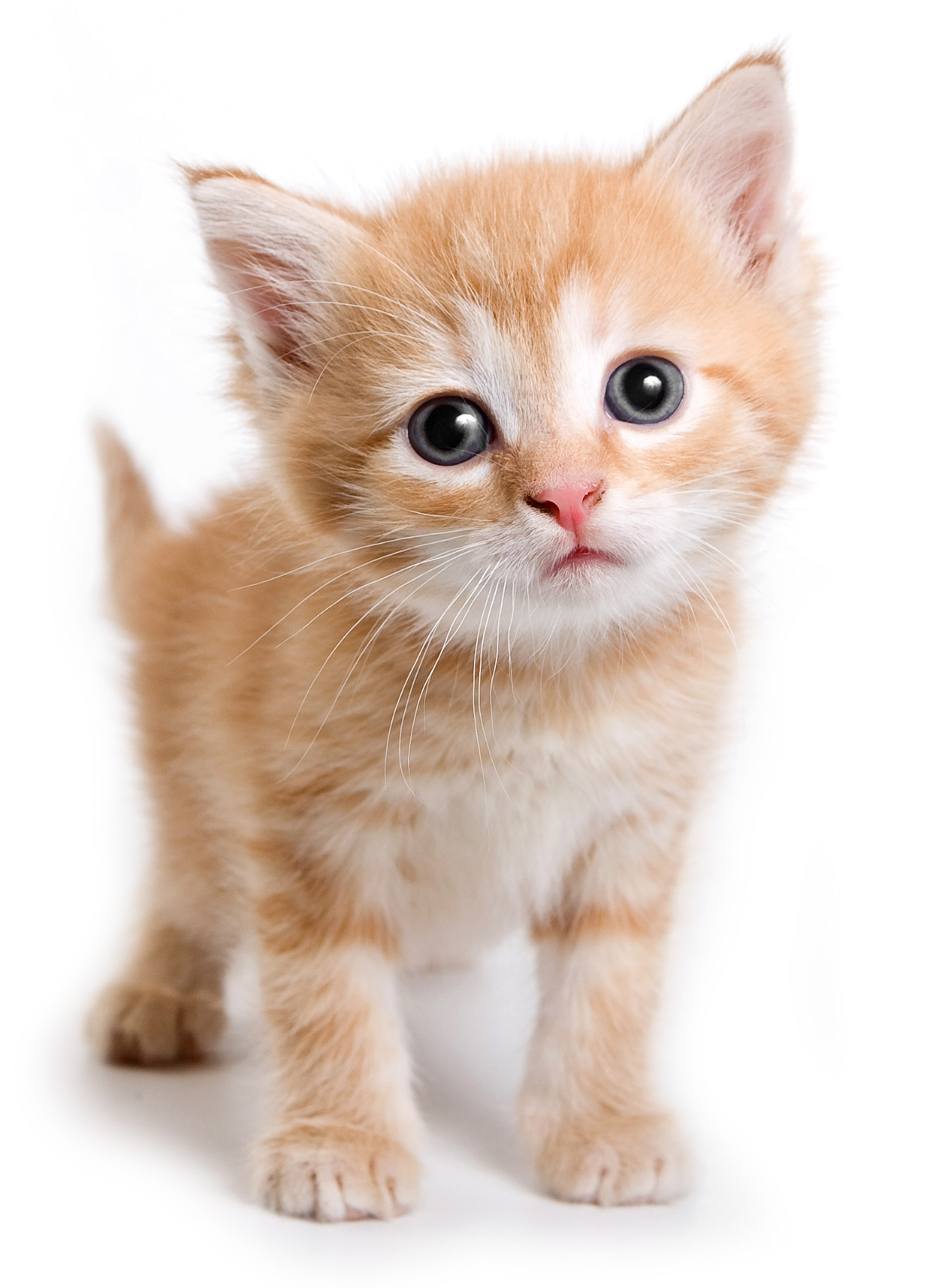 To assess age veterinarians will look at whether a kitten’s eyes are open, his teeth have erupted, how mobile he is and how much he weighs.

From a developmental perspective, and assuming the kitten doesn’t have any health issues holding him back, there is a clear timetable for what takes place and when.

Cats are an altricial species.

This means that they are born in an undeveloped state and with most of their physical and emotional development yet to take place.

This is important because it allows kittens’ development to be influenced by the environment around them, which is why they’re so adaptable!

So exactly how do kittens develop?

Let’s go on the journey all kittens take as they make their way through their first precious months of life.

A cat’s pregnancy lasts for 63 days and during this time the kittens are already developing some important senses and reflexes.

After only 24 days in their mom’s womb they can already start to sense touch.

At around day 25 days fetal kittens show their first spontaneous movement. even though they are only 15 to 16 millimeters in length.

At around two weeks before birth, their balance starts to develop, including their ability to right themselves in mid-air.

For the healthy development of her unborn kittens, it’s vitally important that during this time mom gets the right type of food in the right quantities and her exposure to stressful events is kept at a minimum.

Kittens arrive in the world blind, deaf, without the ability to regulate their own body temperatures, and unable to move more than a few inches.

So, for the first 14 days of their lives their mom is the most important thing in their world.

She provides them with warmth, security and of course, food.

Fortunately, kittens are born being able to feel and smell, and they use these senses to find their first meal.

Although their forelimbs are very stiff and unable to bear weight (to prevent them from wandering away from the nest), within eight minutes after birth they’re able to use them like paddles to move the very short distance to their mom’s teats.

Once there, the dependent newborns purr and tread the teats with their paws to stimulate the flow of milk.

Within the first 24 to 48 hours each kitten has chosen their favourite teat and use their sense of smell to identify and follow the paths they have previously taken to it.

Kittens are also unable to eliminate for themselves, so during the first two weeks, mom plays an important role in stimulating her kittens to pee and poop.

She does this by licking the anus of each kitten.

Once the toileting is done, mom will then eat their waste.

Whilst this might sound distasteful, in the wild this behaviour is very important to the survival of the kittens.

If their nest remains clean and odor-free, they’re less likely to be found by predators.

Kitten Development in the First Week

By day five the kittens are starting to hear and respond to sound.

But when do kittens open their eyes?

Between seven to ten days old the kittens’ eyes start to open and it takes a further two to three days before both are fully open.

Shortly before two weeks of age their baby teeth start to come through.

The one-week old kittens are unable to produce stress hormones such as adrenaline.

This allows them to be cocooned in a fear-free world consisting mainly of warmth, full bellies and getting to know each other.

At two weeks of age the kittens are still dependent on their mom’s milk for nutrition, and
although they don’t have clear vision until around 16 weeks of age, they can hear and see a bit more of what’s going on around them.

By now they should have doubled their birth weight and their brains will also be developing rapidly.

Around now you might start asking yourself when do kittens start walking?

By the end of week two some kittens may be able to start taking their first wobbly steps around the nest.

Two weeks marks the start of the Socialisation Period which last until the kittens are seven weeks old.

This is when they learn what’s good and what’s bad about the world.

It is one of the most important kitten stages because what happens during this period has a huge impact on the rest of their social lives.

If they have positive experiences with people and other cats during this time, they are much more likely to accept them in the future.

Conversely, they more likely to be forever frightened of things that they don’t experience such as children, dogs and loud noises.

They are more able to regulate their body temperature and can voluntarily eliminate.

Rather than being guided to their mom by smell and warmth, they are now using their developing eyesight to find her and to start being able to distinguish their littermates from one another.

If you’ve ever asked yourself ‘when do kittens eyes change color?’, this also happens during week three.

By week four the kittens’ hearing is fully developed and their mobility and coordination are improving.

This is when they start to chase and jump on their littermates and perform all those movements that appear so comical in kittens, such as walking sideways like a crab, with their back and tail arched.

They’re now moving further away from the nest and if they fall, they can use their famous body-righting reflex to land on their feet.

This is also when the weaning process begins.

Periodically mom will start occasionally denying access to her milk by lying with her abdomen pressed to the ground, so the kittens can’t reach her teats.

You might think that this isn’t great 4-week-old kitten care on mom’s part, but it is an important way of teaching them to look for food elsewhere, be it from us their owners, or from mom teaching them how to hunt and kill prey.

Once we humans take over responsibility for providing our kittens’ nutritional requirements, knowing what to feed them can be confusing and daunting.

Thankfully, there’s our informative guide to the best kitten foods to help you make the right choice for your kitten.

By week five the kittens have started to move like adult cats.

Such skills are very important for these future highly specialised killing machines!

They’re also starting to learn all about the most effective way to play from their littermates.

By six weeks of age the kittens are more likely to be rejected by their mother when they attempt to suckle from her.

It’s therefore also the time when they are more likely to start killing prey of their own.

To facilitate this, they will continue practicing on the objects around them – chasing them, batting them and tossing them in the air.

Cats and kittens do this to ensure that prey with sharp teeth are dazed before they attempt to kill them.

They continue to play with their littermates but are now using specific signals by way of an invitation.

By week seven the weaning process is usually complete.

The kittens are now showing adult-like responses to threats by freezing, running away or showing aggression.

By this time, they have also developed adult-like sleep patterns.

At this time, 2-month-old kittens will be exploring more of their surroundings.

Their emotional awareness is expanding, and they are increasingly receptive to learning the consequences of success and failure of both hunting and social interactions.

This is also the time when an 8-week kitten might go to his new home.

By this stage kittens are developing more complex coordination skills such as walking and turning on a fence.

Assuming the litter is still together, play will have become rougher and some kittens may even get hurt.

Fights between littermates continue to escalate and become more aggressive.

So, it’s not surprising that it’s around this time that mom encourages her kittens to leave the nest.

Especially the males, as they naturally play more roughly than females.

Cats are a territorial species and once the kittens start to mature it’s not natural for mom and offspring to remain together.

So, if they are to spend their lives sharing the same home, it’s possible that once they reach adulthood, the offspring may decide to create their own separate territories within the home.

By now the 5-month-old kittens are hurtling towards adolescence.

Their milk teeth will have fallen out or been swallowed and been replaced by adult teeth.

The kittens are becoming longer, leaner and their coats sleeker.

Hormonal changes are happening as they turn into a teenager.

Although sexual maturity normally occurs to a six-month-old kitten, this can occasionally happen sooner, so neutering them at five months of age, or even earlier is usually advised.

When Does a Kitten Become a Cat?

There is no easy way to answer this question because the shapes and sizes of cats when fully grown can differ widely, especially when you take into account all the different breeds.

There is much more information on this in our article When Do Cats Stop Growing?

So, here we have a truly amazing little creature.

Born completely helpless, kittens embark on a journey of discovery during which time they not only undergo rapid physical development, but also need to learn as much as possible about their environment and everything in it, if they’re to survive and thrive.

If you have any concerns about how your kittens are developing, you should contact your veterinarian. 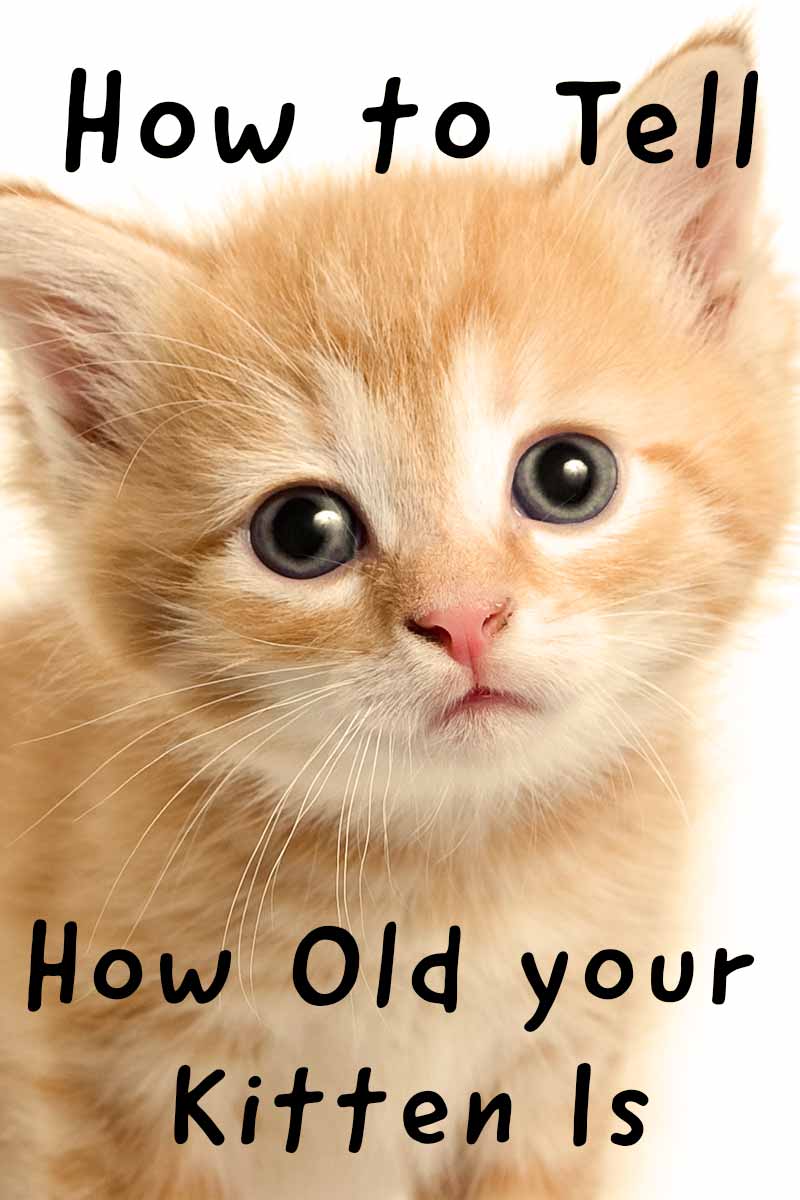 Has Your Cat Ever Reared Kittens?

What were your favorite milestones of kitten development?

Please share them in the comments section below – we love kitten stories!

Wever, B., Feline Behavior: A guide for Veterinarians (2003)

Neville, P., The Emotional and Behavioural Development of Kittens (2013)

Turner & Bateson, The Domestic Cat, The Biology of Its Behaviour, 2000

I recently read a thread in an online pet … END_OF_DOCUMENT_TOKEN_TO_BE_REPLACED

The Exotic Shorthair was created to be a … END_OF_DOCUMENT_TOKEN_TO_BE_REPLACED