Are you ready to fall in love with the grey Maine Coon cat? Because you will do by the end of this article!

Grey Maine Coon kittens have the same amazing personality as Maine Coons of all other colors. Several shades of grey and grey patterns are possible in their coat, but you might be surprised how some of them are actually described on their pedigree certificate…

What is a Grey Maine Coon?

Yes! Cat aficionados have their own terminology for describing some elements of cats’ appearance, and for that reason Maine Coons in light shades of grey are officially called silver, and darker shades of grey are properly known as blue. Blue is used by both cat and dog breed registries to describe animals with a deep, slate grey coat. Blue Maine Coons look like fairy tale beasts straight out of the pages of a folk story!

Not all grey Maine Coons have a solid grey coat. All of the following colors and patterns are possible according to the Cat Fanciers’ Association official breed standard:

Another category of grey and white Maine Coon kittens are the chinchilla, shaded and smoke patterns:

Lots of our readers have asked ‘are blue Maine Coons rare?’ and the answer is actually a bit more interesting than just yes or no. Grey coats are caused by dilution of black pigment in the cat’s fur. Color dilution like this is controlled by a gene called the dilute gene. Cats only have dilute coats when they inherit two copies of the dilute gene, one from each parent. Without selective breeding, this would make grey Maine Coon kittens rare. But, since breeding choices are actually made and controlled by breeders, it’s reasonably straightforward to engineer litters of grey and grey and white kittens.

Likewise, tabby, chinchilla, shaded and smoked patterns are controlled by known series of genes, so a competent breeder will be able to predict which combinations of tom cat and queen ought to produce grey tabby Maine Coon kittens.

Since pedigree Maine Coon breeding outcomes are so heavily decided by humans and not the cats themselves, the frequency of kittens in any given color is significantly dictated by how desirable and sought after that color is. But some less-than-scrupulous breeders might also imply that a color is hard to achieve, in order to charge a high grey Maine Coon cat price. Reputable breeders rarely charge extra for unusual colors, despite their rarity, because they know that doing so increases their appeal to kitten farms, and puts kittens at risk.

Maine Coons are big, friendly, giants of cats. Grey Maine Coon size can be over a foot tall, and up to 18 pounds. They tend to be very chatty and often stick close to their human family. However, they’re rarely described as lap cats, and often dislike being cuddled at all. Unlike most cat breeds, lots of Maine Coon owners report that their cats love water! Some people attribute this to their historic role as rat catchers on board merchant ships. Maine Coons are also very intelligent, and respond well to clicker training.

This personality profile is true of Maine Coons in all colors, including those with blue fur, and light grey tabby Maine Coon cats. Interestingly, one survey of people’s perceptions of cat behavior in 2015 found that grey and white cats were more likely to be described as aggressive at home, during handling, and at the vet. But they didn’t gather enough data to explain why that might be, and it could still turn out the results were a coincidence.

Before embarking upon life with any color of Maine Coon cat, it’s important to consider their health. Most grey Maine Coons will live to at least 12 years old. At the time of writing, there’s no evidence that their health or lifespan are affected by their color. By virtue of their breed, Maine Coons of all colors are more than averagely likely to be diagnosed with:

Between one quarter and one third of Maine Coons carry a faulty gene which causes the heart disease hypertrophic cardiomyopathy, where the heart muscle grows abnormally thick. Nutrition and rate of growth during kittenhood, larger body size and obesity may also increase the risk of a cat with the faulty gene going on to develop symptoms.

One of the perils of being a larger cat breed is an increased risk of joint problems. Specifically, 1 in 4 Maine Coons are diagnosed with some degree of hip dysplasia, a malformation of the hip joint which causes painful arthritis and sometimes even lameness. There are also diagnoses of elbow dysplasia and knee problems among Maine Coons.

A grey Maine Coon looks fabulous, but they can be high maintenance too. Like all cats, Maines will care for their coat fastidiously, and spend hours a day cleaning and straightening it. However, they have a lot of coat to get through, and some cats do struggle to keep on top of it. In particular, overweight cats, senior cats, and cats with joint diseases, who can’t comfortably reach all areas to groom them. To help keep your Maine Coon free of mats, tangles and debris, it’s wise to brush them with a slicker brush at least once a week. Starting while they’re a kitten can make this as painless as possible.

Grey is a striking colorway of the popular Maine Coon cat breed. It can be present as a solid dark slate color, or a bright silver background with tabby markings. And many other patterns besides. There’s some evidence that grey and white cats are more likely to be described as aggressive than other cats colors, but there’s still work to do to confirm if or why that is. If you choose a grey Maine Coon, they’re likely to have the same confident and sociable, but not soppy, personality as Maine Coons in any other color. If you’re buying a grey Maine Coon kitten, it’s important to choose a reputable breeder, and prioritise health over color.

Do you have a grey Maine Coon cat? Or do you think it should be gray Maine coon cat? Tell us all about them in the comments box down below! 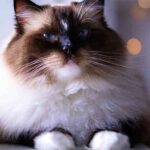 A seal mitted Ragdoll cat has seal points and … END_OF_DOCUMENT_TOKEN_TO_BE_REPLACED 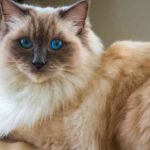 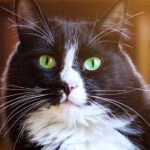 Black and white female cat names can be … END_OF_DOCUMENT_TOKEN_TO_BE_REPLACED 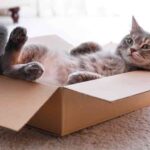 Looking for some funny girl cat names to suit … END_OF_DOCUMENT_TOKEN_TO_BE_REPLACED